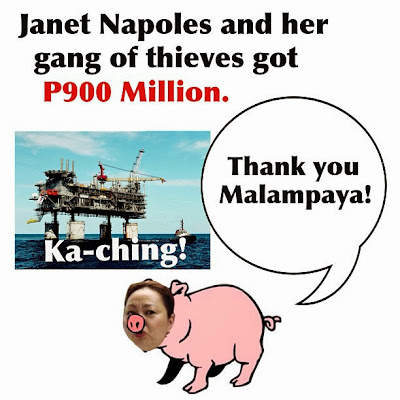 Even if Congress amends PD 910 or enacts a new law that would define and expand the authority of the President in using the Malampaya Fund, this is not a foolproof escape route from the onerous provisions of a martial law presidential decree and it will certainly not prevent misappropriation and misuse of the Fund and future pork barrel scams. By and large, it only enhances the probability of more abuses and opportunities for economic plunder by this administration and succeeding governments since the pie would be significantly enlarged, not to mention the broad discretion to use it.
It was estimated that the Malampaya project would yield over P12 billion annually in royalty shares for the national government. In 2012 and 2013, the royalty shares reached $1 billion or P40 billion annually.
During the Arroyo Administration, about P25 billion was spent while P15 billion has been used under President Noynoy Aquino. The Malampaya royalty will get larger and the opportunities for its misappropriation and abuse will increase exponentially. In fact, the Malampaya Fund has become a huge political pork barrel.
There is also an ongoing dispute before the Supreme Court regarding the legal framework on natural wealth sharing. Under the Local Government Code, the local government unit where a natural gas field, in this case the Malampaya gas project, is located gets 40 percent of the royalties while the national government, 60 percent. But Palawan has been denied by the national government of its share and it’s taking the Supreme Court an inordinate time to rule on the territorial jurisdiction issue.
The interim sharing between the national government and Palawan has not been subjected to public scrutiny and transparency. Although an initial release of P3.9 billion to Palawan has been made in 2008, the disposition of the fund did not follow the general provisions of PD 910 which prescribed that 80% must be spent in energy-related projects benefitting the local population.
As it was the case for the congressional pork barrel, local political leaders determined the projects and manipulated bidding rules to favour certain public works contractors. Like the Napoles pork barrel scam, there were ghost and overpriced projects.
To reverse the current situation, Congress must regain its power to legislate under the Constitution by revoking all presidential decrees issued by the Marcos dictatorship. It must exercise congressional oversight of the Malampaya royalty fund, with the end in view of depoliticizing the fund as a pork barrel.
In addition, the Supreme Court should now decide on the sharing arrangement between the national government and Palawan: the Malampaya royalty should be used where the law intends it to and the local population gets the benefits from the exploitation of their natural resource.
Posted by Joe Rivera at Wednesday, October 16, 2013