Pop, pop, pop!, the continuous burst of bullets from a Glock or assault weapon, instantaneously ending the lives of innocent people in the wrong place at the wrong time. This ominous sound of pop shows America’s maniacal obsession with guns. Instead of gun culture, they might as well call it more aptly as their other “pop” culture.
In America, they shoot their presidents (four successful assassinations – Lincoln, Garfield, McKinley and Kennedy), and of course, innocent little children and just everyone else no matter who they are or how old or young they are. Remember John Lennon, the pop icon? They shot him dead, too. Ronald Reagan was also shot, but his assassin failed.
From Columbine in Colorado to Newtown in Connecticut, all these senseless killings were accomplished through the barrel of a gun. The school massacre in Newtown last week is the absolute worst in U.S. history, twenty little children six years detached from birth, shot to death even before they could have their first Communion or bar mitzvah.
Condemnation after condemnation will not change things as they are. Gun control will never be adequate. The U.S. Constitution is killing Americans, and it’s about time to seriously reconsider “the right to bear arms.”
The Second Amendment guarantees the right to keep and bear arms in the context of a well-regulated militia that is necessary to the security of a free state. This right is valid only insofar as it confers collective right to citizens of the states participating as members of official state militias. For more than 200 years, this has been the law of the land. But the NRA and gun advocates were successful in distorting the Constitution. In 2008, the U.S. Supreme Court issued a landmark decision in District of Columbia v. Heller that says the Second Amendment protects an individual's right to possess a firearm, even if unconnected to service in a militia and to use that arm for traditionally lawful purposes, such as self-defense within the home. This ruling makes effective gun control in the United States all but impossible.
In an article he wrote concerning the Second Amendment for Harper’s Magazine in October 1999, “Your Constitution is Killing You,” Daniel Lazare, doubted whether the Constitution was “the greatest plan on earth, that it contains notions that are repugnant to the modern sensibility?...Could it be that constitutional faith is not enough to get us through trying times?” Lazare has urged for a serious reconsideration of the right to bear arms but he thought Americans are powerless to change the Second Amendment. “Repealing the Second Amendment would be akin to repealing the four Gospels, the issue is moot,” he wrote.
With the U.S. Supreme Court guaranteeing an individual right to bear arms, there seems no solution to the gun problem within the confines of the Constitution. Banning some kinds of firearms but not others, or limiting handgun purchases, or providing for background checks at unregulated gun bazaars which include Walmart – all will fall short of controlling or wiping out the menace that gun ownership has visited upon the American people.
Imagine if every American citizen would take this right to bear arms for the purpose of self-defence seriously. There’s no need for the police, the FBI, the National Guard or even the army. Each one is responsible for his or her security. Semiautomatics and assault rifles everywhere, this is a sure recipe for anarchy. Then the United States becomes an armed society, no longer recognizable as a civil society. At that point, freedom shall have vanished – which is the ultimate purpose of the Second Amendment.
Lazare, in his more recent book, The Velvet Coup: The Constitution, the Supreme Court, and the Decline of American Democracy, contends that nothing less than a democratic revolution is needed to rescue American politics from growing paralysis and decay. A constitution that cannot be effectively amended by the people is patently absurd. Rather than a constitution that chains the people to the past, Lazare argues that the American people need a constitution over which they can exercise control and which can set them free from the shackles of the past.
In an emotional speech during a memorial service in Newtown last Sunday, U.S. President Barack Obama declared that there was no longer any “excuse for inaction,” suggesting this time may be different. Pundits were quick to compare Obama’s speech to Abraham Lincoln’s Gettysburg Address and others suggested that Newtown may be what Birmingham was to John F. Kennedy in inspiring civil rights action.
But the Obama administration is still saddled with the worst economic crisis the U.S. has faced in generations. The fiscal crisis looms as Obama continues to negotiate with House Speaker John Boehner on a deal that could prevent the government from falling off the cliff when the new year starts. Besides, the Republican-controlled House, whose members are in bed with the NRA, might not be receptive to new gun legislation. So, where does this leave Obama to gather the necessary impetus to embark on meaningful comprehensive gun control without eroding the right to bear arms under the Second Amendment or provoking a near-civil strife scenario led by gun-wielding members of the NRA and its army of followers? Or, does action have to wait a little longer until every American home is equipped with a weaponized drone operated like a PlayStation right in the heart of the living room?

But one thing everyone agrees with after the Newton school massacre is: less talk. Talk is cheap. It’s time for action. No further argument from this blog. Just roll down the images below and see (or feel for yourself) how private gun ownership in the United States has falsely provided every American citizen the ultimate insurance of their freedom. 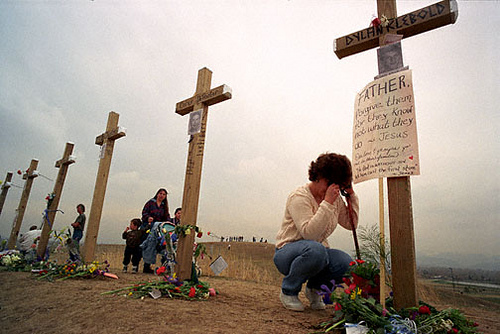 Cindy Fairchild, of Aurora, Colo., prays below a six-foot cross in honor of Columbine shooter Dylan Klebold at Robert F. Clement Park in Littleton. Fifteen identical crosses were planted on a hill in the park, one for each victim of the shootings at Columbine High, including shooters Eric Harris and Dylan Klebold. Photo by Steve Gorelick. 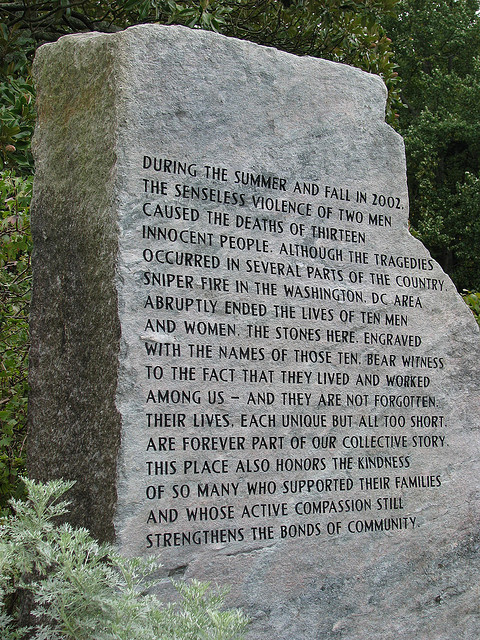 October 22, 2008 - Reflection Terrace, the memorial to the victims of the Beltway Sniper Attacks at Brookside Gardens in Wheaton, MD. Back in October 2002; 2 men murdered 10 people and injured 3 others in senseless acts of violence that took place in Montgomery County, Prince Georges, Prince William Counties, MD; Spotsylvania County, Arlington County, VA, and Ashland, VA. I personally remember this time, it’s one of the events that I will never forget. I still remember the locations of 4 of the shootings, I remember the media frenzy and knowing that you were not safe, everything that you did you had to be always on looking around, be on high alert. Even when pumping gas, you feared for your life. Photo by Dan Dan The Binary Man. 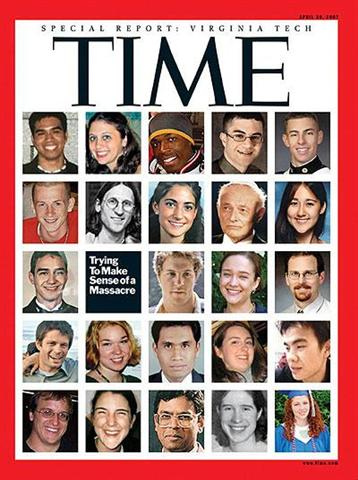 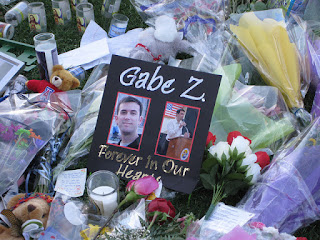 "Together We Thrive for Tucson and America" Memorial Event. January 12, 2011. By nicandx. 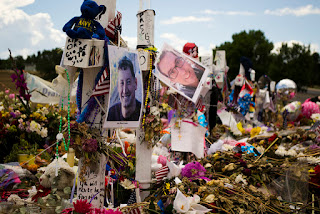 Amy’s sister lives about a mile away from the Century movie theater where the Aurora shootings happened on July 20, 2012. We stopped at the memorial one day. There were amazing amounts of flowers, stuffed animals and other random objects that were placed near crosses to remember the 12 killed and 58 injured.  Photo courtesy of Yooper-Cal. 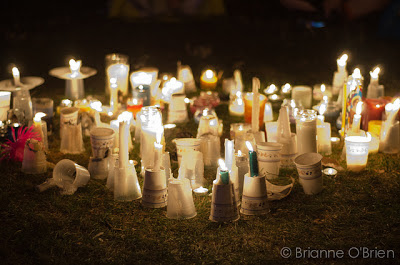 In memory of the victims of the Wisconsin Sihk Temple shooting. Photo by brianneobrien. 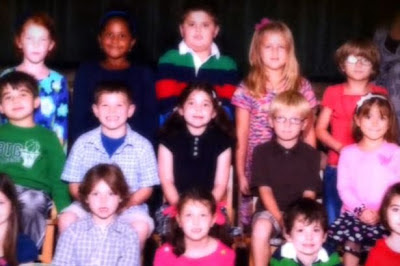 The tragic last school picture of first graders who were gunned down by Sandy Hook shooter with their substitute teacher. 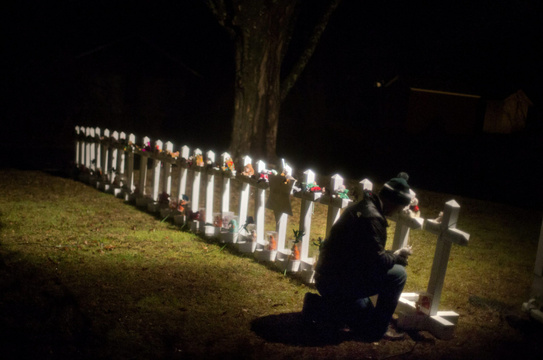 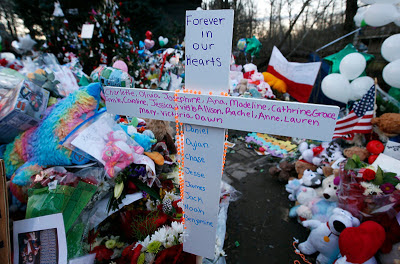