Proud to be what?

Facebook (FB), the most widely used social network on the Internet, is getting closer to its billionth user worldwide. As of May 2012, FB has over 900 million active users, with more than 30 million Pinoy subscribers, the seventh largest in FB’s entire network.
Raissa Robles, the famous or infamous Pinoy blogger who was catapulted to notoriety by her anti-Corona blogs during the impeachment hearing of the Supreme Court Chief Justice, was surprised to find her FB account terminated after the conviction of the Chief Justice last May 29. Only after an on-line petition was started demanding her reinstatement that FB eventually restored her account. Whether Ms. Robles was unfriended due to violation of FB community standards, no one really knows. Despite criticism of FB as being too invasive of personal privacy, this is one matter the FB organization has firewalled, so it seems their privacy is the only one sacred in the entire network.
Be that as it may, sometimes FB users could elicit reactions that are enlightening or revolting, depending on how one looks at them. Take for example the picture below, which seems at first glance like a poster about mixing and matching clothes, but drew out a different and very critical response from an FB friend. 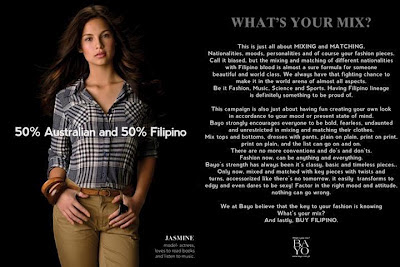